Senate votes not guilty in final impeachment vote. Personal attorney to President Donald Trump, Jay Sekulow, speaks with reporters after Trump was acquitted in an impeachment trial on charges of abuse of power and obstruction of Congress on Capitol Hill in Washington, Wednesday, Feb. 5, 2020. (AP Photo/Patrick Semansky)

President Trump scored a victory in the drawn out impeachment battle. The Senate voted largely among party lines Wednesday to acquit the president of the articles of impeachment charges.

“The real victor today was the American people, but also the Constitution, the Office of the President, of course, the president himself,” said Jay Sekulow, attorney for the president’s legal team.

The first article, which accused the president of abuse of power, received a 48-to-52 vote, failing to secure a super majority to convict and remove him from office. The second article, which details allegations of obstruction of Congress, failed with a 47-to-53 vote.

While all Democrats voted to convict the president on both charges, GOP Sen. Mitt Romney (R-Utah) broke with his party and voted “guilty” for the first article. Democrat Sen. Chuck Schumer (D-N.Y.) spoke to reporters lauding Romney for his vote and accused Republicans of engaging in a cover-up.

“First, I do want to salute Mitt Romney, the pressure on every Republican was enormous,” said Schumer. “And I believe the American people will realize that this was one of the largest cover-ups in the history of our nation.” 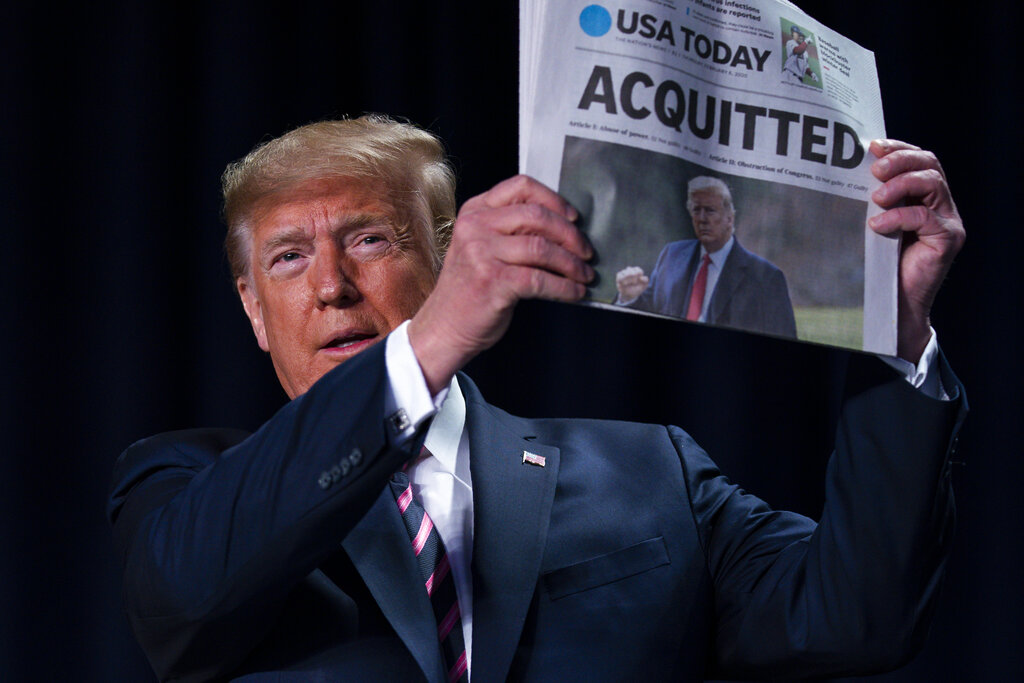 President Donald Trump holds up a newspaper with the headline that reads “ACQUITTED” during the 68th annual National Prayer Breakfast, at the Washington Hilton, Thursday, Feb. 6, 2020, in Washington. (AP Photo/ Evan Vucci)

Senate Majority Leader Mitch McConnell (R-Ky.) also responded to Romney’s decision, but said he is optimistic the GOP has not lost the support of the American people.

“Well, I was surprised and disappointed, but I still think that we had great teamwork on this and I think we’re in a good position going into our Senate races and the presidential race with regard to this issue,” he stated. “There may be plenty of other issues between now and November, but I think we’re in pretty good shape right now.”

Had failed presidential candidate @MittRomney devoted the same energy and anger to defeating a faltering Barack Obama as he sanctimoniously does to me, he could have won the election. Read the Transcripts!

McConnell went on to say he hopes this will be a lesson to Democrats: “I hope the message to the House of Representatives — don’t do this again.”

With the president acquitted, his legal team and the GOP are happy to finally close this chapter in history.

RELATED: Republicans turn their back on Mitt Romney after impeachment vote