My favorite homemade cornbread recipe that’s lightly sweetened with honey, made extra moist with buttermilk, and irresistibly fluffy and delicious. Easy to make in a basic baking dish or cast-iron skillet — up to you!

We’re in the heart of soup and chili season right now, which means…

Ok ok, I know that cornbread can be served and enjoyed any time of year.  But for me, this sweet and buttery bread is absolute perfection served up on a chilly winter’s day alongside a steaming bowl of chili.  Especially when it’s fresh out the oven and still warm, maybe served up with a pat of melty butter and a drizzle of honey just for good measure, a cozy batch of homemade cornbread simply can’t be beaten!

That said, I’ve learned over the years that people tend to have very strong feelings when it comes to exactly what defines “the best” cornbread recipe.  There is the classic Northern/Southern debate about whether or not to add sweetener, strong opinions about which coarseness of cornmeal to use, the question of whether or not to add in chunks of whole kernel corn as well, and of course, deeply-held feelings about baking dish vs skillet cornbreads.  I happen to love all cornbreads.  But if I had to choose an all-time favorite cornbread, today’s recipe would be it!

First off, I love this homemade cornbread recipe because it’s super easy to make from start to finish in about 30 minutes (with just 10 or so minutes of actual hands-on prep time).  I also split the difference between Northern- and Southern-style cornbreads and like to moderately sweeten my cornbread, since I find the cornmeal to already be quite sweet on its own, and prefer to use honey because it adds such great flavor.  I’m also a big believer in making cornbread with buttermilk, which adds considerable moisture as well as a subtle tangy flavor to the bread.  And I also highly recommend taking the extra time to brown your butter before adding it to the batter, which adds the most irresistible hint of nutty, rich, caramelized flavor.

We usually make skillet cornbread in our house with a cast iron pan, which deepens the layer of golden, caramelized crust around the edges of the bread.  But that said, if you don’t own a cast-iron skillet (or oven-proof skillet), no prob at all, I’ve also included instructions for how to make cornbread using a traditional baking pan, which will still be delicious.

Let’s make some cornbread together, friends! Before we get to the full buttermilk cornbread recipe below, here are a few important notes about the ingredients you will need to make this recipe:

HOW TO MAKE CORNBREAD:

So as I mentioned, I’ve included two options for how to make cornbread below — one using a 9-inch or 10-inch cast-iron skillet (or any oven-proof skillet) and one using an 8-inch or 9-inch square baking dish.

Personally, I’m partial to that more deeply golden, crispy, caramelized crust that develops in skillet cornbread, thanks to preheating the skillet in the oven beforehand and that magical sizzle when the batter hits the hot pan.  But that said, we also love the basic baking dish version in our house, which is also wonderfully delicious and yields much more evenly-baked squares of fluffy bread.  So you choose whichever pan sounds best to you!

If you’re using a cast-iron skillet, you can also do some multi-tasking and let the butter melt and brown in the skillet as it preheats in the oven.  (To save time, let the skillet preheat while you mix the rest of the batter!)  Or if you’re using a baking dish, you have the option of either browning the butter in a separate pan on the stove, or you can just skip the step of browning the butter altogether and add plain melted butter to your cornbread.  Again, whichever sounds best to you!

See the recipe below for full instructions for both methods. If you’d like to incorporate some fun add-ins to this buttermilk cornbread recipe too, feel free to…

Most of the time, we just love serving plain cornbread squares (or wedges) as a side dish in our house.  But you could also make… If you make this recipe, let me know in the comments below how it goes.  I hope you love it!

My favorite homemade cornbread recipe that’s lightly sweetened with honey, made extra moist with buttermilk, and irresistibly buttery and delicious. Options included below to make this recipe in either a pre-heated cast iron skillet or a basic baking dish. 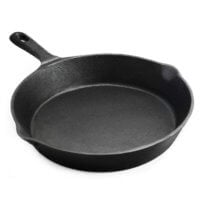 Fine sea salt: Please note that this recipe uses fine sea salt.  If you only have iodized table salt on hand, I recommend using only 1/2 teaspoon.

Basic baking dish instructions: Heat oven to 400°F.  Grease an 8-inch or 9-inch square baking dish with cooking spray.  Brown the butter in a separate sauté pan (or you can just melt the butter in a pan or in the microwave without browning it) while you complete steps 3 and 4.  Then pour the butter into the batter and stir until it is just combined, taking care not to over-mix the batter.  Pour the batter into the prepared baking dish and bake for 20 to 25 minutes, until a toothpick inserted in the center of the cornbread comes out clean.

Storage instructions: Leftover cornbread can be stored in an airtight container at room temperature for up to 3 days, refrigerated for up to 5 days, or frozen for up to 3 months.  To freeze the cornbread, I recommend wrapping up the individual pieces and then placing them in a sealed freezer-safe food storage container.