Arguments and accusations from House prosecutors marked the second day of the Senate impeachment trial. The trial kicked off Wednesday with two-hours of opening statements.

Democrat House managers reportedly went into lengthy and worn-out arguments. In one instance, Rep. Adam Schiff (D-Calif.) cited the founding fathers to accuse the president of corruption for allegedly pressuring Ukraine to investigate a political opponent.

“The framers of the Constitution worried then, as we worry today, that a leader might come to power not to carry out the will of the people that he was elected to represent, but to pursue his own interests,’ he stated. “They fear that a president would subvert our democracy by abusing the awesome power of his office for his own personal or political gain.”

Rep. Schiff went on reportedly suggesting removing President Trump from office is necessary to safeguard the 2020 elections from a Russian meddling. 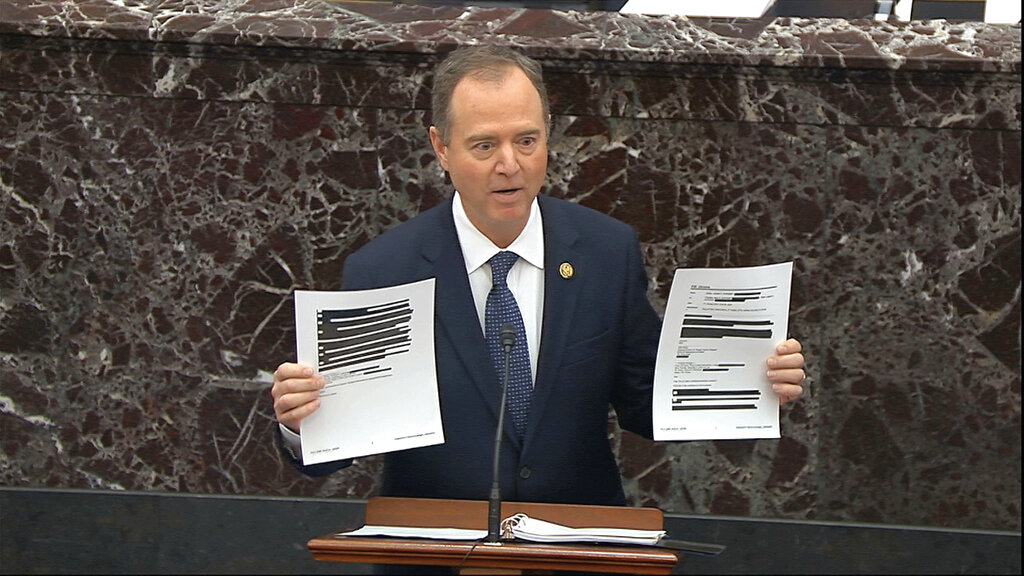 In this image from video, House impeachment manager Rep. Adam Schiff, D-Calif., holds redacted documents as he speaks during the impeachment trial against President Donald Trump in the Senate at the U.S. Capitol in Washington, Wednesday, Jan. 22, 2020. (Senate Television via AP)

Although House Democrats promised to create a “overwhelming and damning” picture of the president’s alleged misconduct they failed to appeal to their Republican colleagues. One of those GOP members is Sen. John Barrasso, (R-Wy.), who made the following comments following the trial:

“Well, we’ve just come out of listening to, what, about six hours of testimony so far today, six and a half. I didn’t hear anything new at all. We were here all day yesterday for about 13 hours. No new material presented. It still seems to me this this was an effort by the Democrats in a very partisan way to bring a case against President Trump because they weren’t happy with the results of the 2016 election and are concerned that they’re going to have real problems in the 2020 election when we look at the candidates running for president against President Trump.”

Meanwhile, President Trump seems to be unaffected by the trial against him and issued a response before leaving the World Economic Forum in Davos, Switzerland. “They’re doing a very good job, we have a great case,” he stated.

As the trial concluded for the day, the president’s impeachment defense team echoed similar optimism.

“I want to let them try their case and we want to try our case, because we believe without a question that the president will be acquitted,” said Jay Sekulow, personal attorney for President Trump. “There is not a doubt.”

Minneapolis Will Buy Out Kmart