Royal Bank of Canada (RY) is a good income play and due to its large size and significant exposure to the U.S. also is an investment alternative to large U.S. banks. It offers a higher dividend yield and has a defensive business profile, an interesting combination for long-term income investors.

Royal Bank of Canada (NYSE:RBC) is the largest Canadian bank measured by market value, with operations across 36 countries throughout the world. It trades in the U.S. on the New York Stock Exchange and has a market capitalization of about $114 billion.

By geography, Canada is by far its largest market accounting for some 62% of its revenues, 23% comes from the U.S., while the rest is generated in other international markets.

Its loan book is biased towards individual customers (about two thirds of the total), with residential mortgages representing close to half of its loan book. By region, RBC is heavily exposed to Canada, which represents some 84% of its loan book. It has a small exposure to credit cards and small businesses, which are typically higher-risk credits. Therefore, RBC has a defensive credit profile, which has been reflected in its very low levels of loan losses in most recent years.

Given the bank’s large exposure to Canada, its strategy is to remain a leader in its domestic market, targeting market share leadership in all banking product categories. Due to its breadth of financial products and services offered and extensive branch network, it has good opportunities for cross-selling several products to customers, which bodes well for growth across its different businesses over the long haul.

Additionally, like most of its peers, RBC is investing in digitalization to simplify its processes and offer a compelling service to customers, aiming also to improve efficiency through reducing costs in the long-term.

In the U.S. the bank has a more nimble approach, targeting specific market segments for growth. Indeed, it aims to focus its operations in corporate, institutional and high net worth clients, not aiming to be a significant bank in retail banking.

In its capital markets unit, it is already among largest investment banks and its goal is to remain a leading financial services partner in selected global financial centers.

This means that RBC’s business and financial profile is not expected to change dramatically in the next few years, as the bank should continue in a gradual growth path with a relatively low risk profile. This has enabled the bank to have a very good level of profitability, while at the same time grow its earnings in mid-single digits over recent years.

Indeed, its profitability history is among the best for large banks across the globe, given that its return on equity has been about 17% over the past four years, a value that compares quite well to large U.S. banks like JPMorgan (JPM) or Bank of America (BAC).

Going forward, RBC should be able to continue to grow modestly its revenues and bottom-line if the macroeconomic background remains supportive in North America, something that is reflected in its quite conservative financial goals. RBC’s goal in the medium-term (3-5 years) is to grow i ts diluted EPS by 7% per year, to achieve an ROE above 16% and maintain a strong capital position (without having a specific target).

These targets have been met in the recent past and don’t seem to be particularly ambitious, which is comprehensible due to the bank’s large size and management’s conservative approach to risk. Therefore, RBC should continue to prioritize profitability rather than growth in the foreseeable future.

Regarding its financial performance, RBC has delivered very good results over the past few years, boosted by a positive macroeconomic environment in North America.

In its last fiscal year 2019 (which ends in October), RBC reported revenues of CAD $46 billion, representing an increase of 8% compared to the previous fiscal year. This growth was mainly justified by loan growth (up 7% year-on-year) and higher spreads in its Personal & Commercial business.

Net interest income amounted to CAD 19.8 billion, representing about 43% of total revenue. This clearly shows that RBC is a bank that has a good revenue diversification by business line and is not much sensible to the level of interest rates. Indeed, non-interest income represent the other 57% of revenue and is well spread across insurance premiums, investment management fees, mutual fund revenue, beyond others.

This means that RBC’s revenues come vastly from related financial services beyond banking, due to its cross-selling strategy of pushing for several financial products to its customers beyond the traditional banking deposits and lending.

Total expenses also increased during the year to CAD $24.1 billion, up by 6% year-on-year, but at a lower rate than revenue growth, which means that RBC had positive operating jaws (revenue growth – cost growth) and efficiency improved a little bit in the past fiscal year.

Its efficiency ratio was 52.5% in FY 2019, a very good level and below the efficiency ratios of the largest U.S. banks that are in the 55-60% range. Therefore, RBC doesn’t seem to have much improvement to do on efficiency and this should not be a significant earnings growth driver in the coming years.

Regarding credit quality, RBC has had very low levels of credit losses over the past few years, but more recently the trend has been for higher losses. In FY 2019, loan losses provisions increased by CAD $608 million, an increase of 47% from the previous year. Compared to the total amount of loans outstanding this is still a relatively low level given that its PCL ratio was only 31 bps, in-line with its long-term historical average.

Due to a combination of higher revenue growth than expenses and credit losses increases, RBC was able to report a higher bottom-line in the last fiscal year. Its net income was $12.9 billion, representing an increase of 4% year-on-year, while its ROE was 16.8%.

Going forward, RBC should be able to continue to report modest revenue and profit growth, supported by good economic momentum in North America. There are some risks for earnings growth from higher loan losses, but so far these seem to be manageable and aren’t rising to levels that may put overall profit growth at risk.

Regarding its capitalization, RBC had a strong position at the end of October 2019, given that its Common Equity Tier 1 (CET1) ratio was 12.1% and its leverage ratio was 4.3%. These levels are comfortably above its capital requirements (of 10.25% and 3%, respectively), which means that RBC has an excess capital position and does not need to retain much earnings going forward to increase capitalization.

Nevertheless, RBC has a good organic capital generation and has used this to offset risk-weighted assets (RWA) growth and negative regulatory impacts, while at the same time return a good part of earnings to shareholders.

Indeed, RBC has paid a growing dividend over the past few years and performed share buybacks, leading to an attractive capital return policy. Despite its relatively defensive business profile, it only targets dividend payout ratio target of between 40-50%, which seems quite conservative considering the bank’s strong financial profile.

This means that its very good dividend track record of delivering a growing dividend over time is not expected to reverse soon, making RBC a good income play. 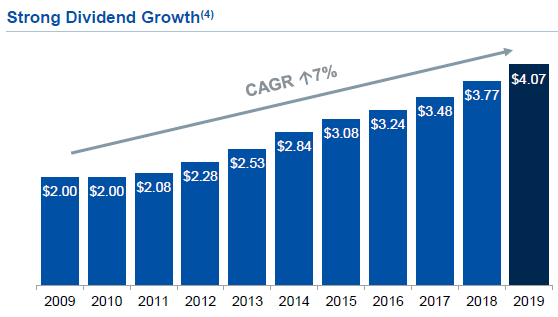 Its last annual dividend, related to FY 2019 earnings, was CAD $4.07 per share, representing an increase of 8% compared to its previous annual dividend. According to analysts’ estimates, its dividend related to FY 2020 is expected to be CAD $4.30, up by 5.7%. At its current share price, RBC offers a forward dividend yield above 4%, which seems quitter attractive compared to large U.S. banks that have all lower dividend yields.

RBC has a very good business profile supported by diversification across several financial products, good efficiency, profitability and capitalization. Recent earnings growth has declined a bit due to higher loan losses, but overall credit quality remains quite good and this issue doesn’t seem to be a reason to put the bank’s investment case in jeopardy.

Therefore, RBC seems to be a good alternative to large U.S. banks from an income perspective, given that it offers a higher dividend yield and has good dividend growth prospects due to its conservative payout ratio. Investors should notice that RBC trades at a premium valuation, at some 1.9x book value, which is more than justified by the bank’s strong fundamentals and higher than average ROE.

Disclosure: I am/we are long RY. I wrote this article myself, and it expresses my own opinions. I am not receiving compensation for it (other than from Seeking Alpha). I have no business relationship with any company whose stock is mentioned in this article.