President Trump delivered his third State of the Union address to Congress. While speaking at the Capitol Tuesday night, he presented his legislative agenda for the coming year and used the platform to tout his administration’s accomplishments.

The president praised the strength of the U.S. economy and touched on his recently passed trade deals, including the USMCA and the ‘Phase One’ deal with China.

“I am thrilled to report to you tonight (Tuesday) that our economy is the best it has ever been, our military is completely rebuilt with its power being unmatched anywhere in the world, and it’s not even close, our borders are secure, our families are flourishing, our values are renewed, our pride is restored and for all of these reasons I say to the people of our great country and to the members of Congress; the state of our union is stronger than ever before,” he stated.

President Trump also took aim at Democrats on the campaign trail by slamming their health care plans and socialist policies, which he said destroys nations.

“132 lawmakers in this room have endorsed legislation to impose a socialist takeover of our health care system, wiping out the private health insurance plans of 180 million very happy Americans,” he stated. “To those watching at home tonight, I want you to know we will never let socialism destroy American health care.”

The president also discussed his efforts to crack down on illegal immigration, which has been the focal point of his 2020 reelection campaign.

“The United States of America should be a sanctuary for law abiding Americans, not criminal aliens,” he explained. “My administration has undertaken an unprecedented effort to secure the southern border of the United States.”

There were many guests present during the speech, all with special invitations from President Trump and First Lady Melania.

The president did not touch on the impeachment proceedings. Despite the partisanship between Republicans and Democrats, he emphasized the country is better off now than it was four years ago. 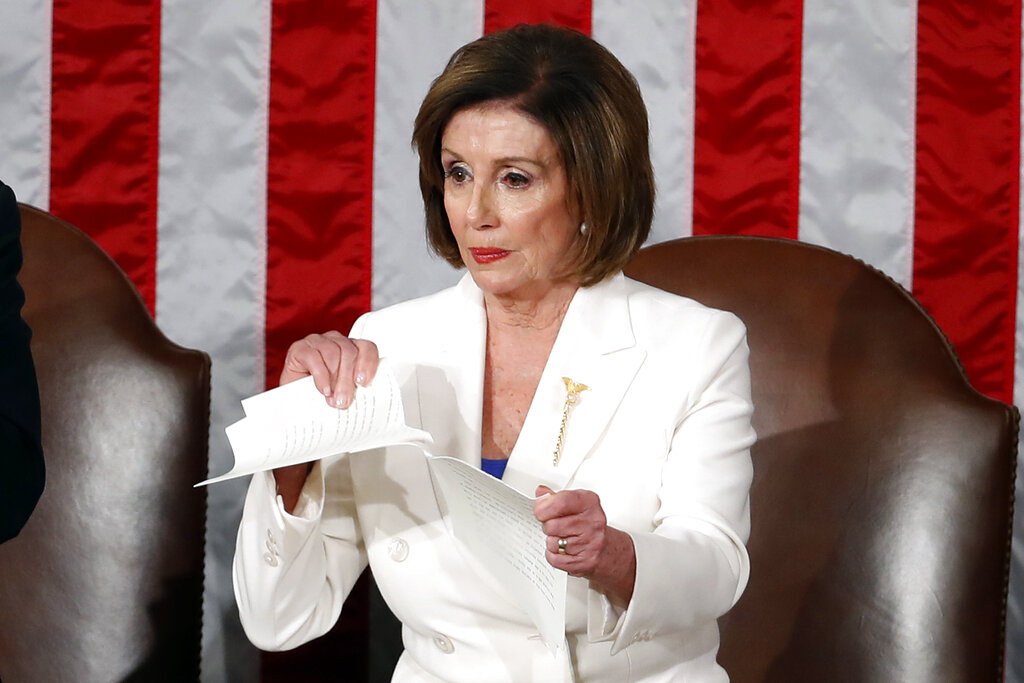 House Speaker Nancy Pelosi of Calif., tears her copy of President Donald Trump’s State of the Union address after he delivered it to a joint session of Congress on Capitol Hill in Washington, Tuesday, Feb. 4, 2020. (AP Photo/Alex Brandon)

Meanwhile, tensions were clear between President Trump and Nancy Pelosi as the House Speaker could be seen ripping up a copy of the State of the Union speech right after the president delivered his closing remarks. It was in those final remarks, however, that the president said the best is still yet to come.

“This nation is our canvas and this country is our masterpiece. We look at tomorrow and see unlimited frontiers just waiting to be explored. Our brightest discoveries are not yet known. Our most thrilling stories are not yet told. Our grandest journeys are not yet made. The American age, the American epic, the American adventure has only just begun. Our spirit is still young. The sun is still rising. God’s grace is still shining. And my fellow Americans, the best is yet to come. Thank you.”